Man is a multidimensional being, living in multiple dimensions simultaneously. About these dimensions, one starts to learn through the physical world. In the physical world, one gains security. The moment one acquired sufficient security, it became possible for one to enter the astral world and meet astral beings.

The world of the astral is the world of the blueprints. It precedes the physical manifestation. By continuous self-development, one gains the ability to maintain consciousness continuity. In the beginning, it is not easy to bring astral experiences in physical reality, but with practice, it becomes possible. Practice makes the master because having astral experiences without knowing how to implement them in life doesn’t have much sense. Especially if astral beings seek to manifest their goals through one, then it is crucial to know how to defend oneself from such beings. They have such an intention because they are not aware of the sources of existence, so such beings try to occupy someone’s physical reality. Such experience can be avoided through self-development, by reactivation of personal compass. Any form of relationship with the lower astral can significantly affect one’s mental and physical health.

Each new level of cognition requires further human development. Sometimes it is necessary to make interventions in past lives for human growth to continue. Namely, as a person gets better in the astral world, one becomes able to return to past lives and resolve the traumas that have remained inscribed in the human soul and hinder one from further creative self-manifestation.

Just as there are impressions of past lives that one carries through lives, there can be various other influences from past lives. For example, an implant and spells are energy records (programs) that one has in their soul and affect one’s behavior. That is not an implant from the present life, but implants that one brought from past lives. Such contents have a subconscious influence. The same applies to the spells that one brings from past incarnations.

Recognizing influences from a person’s past lives restores personal integrity that has a strong effect on existing life.

Topics covered on this level are bolded in the text above. 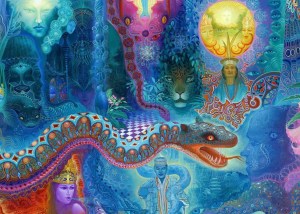